Born to a Navy family, Barb was raised in diverse communities at home and abroad but has spent most of her life in the Puget Sound area. Barb holds a Master’s Degree in International Management and has found a meaningful home working as Executive Director of the South King County Food Coalition and Associate Director of the Des Moines Area Food Bank.

Barb lives in Des Moines with her husband of twenty years. She remains active with the Husky Alumni Band and loves to travel as an international referee in the sport of judo.

You can reach her at director@skcfc.org.

Maggie is originally from the East Coast but has called Seattle home since 2012 when she made the big move to attend the University of Washington. She came to the Coalition through an AmeriCorps VISTA position at Elk Run Farm and loved the work so much she continued on with the Coalition as the new Program Coordinator. In her current role, Maggie facilitates projects across the Coalition including Elk Run Farm, King County Farmers Share and more!

Outside of work, Maggie loves attending concerts of all genres, exploring both urban and wilderness spaces, and making up for lost years as a picky-eater by trying new foods.

You can reach her at programs@skcfc.org.

Maria grew up in Eastern Montana, surrounded by sagebrush and cattle. After receiving a Bachelor's degree in Biology, she decided to pursue farming rather than medicine, and moved to Western Washington. After working on a few local farms, she started her own farm business.

She took over management of Elk Run Farm in 2015, and has focused all her attention on turning a golf course into a beautiful suburban farm. In her free time she loves to cook, to spend time with her large, extended family, and to watch Netflix, preferably all at the same time.

You can reach her at elkrunfarm@skcfc.org. 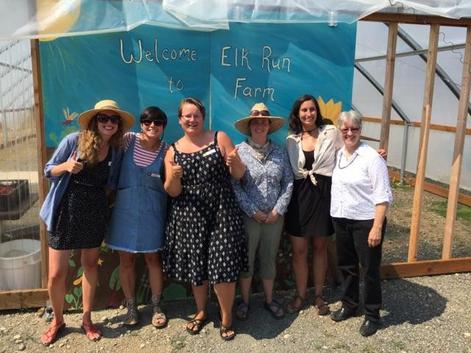